In the land of castles and fortresses 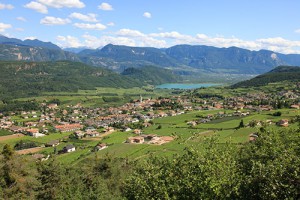 Caldaro on the lake


… is one of the most fascinating holiday destinations in South Tyrol. The market town of Caldaro is located at the feet of the Mendola Group, surrounded by vineyards, just 15 km from the province capital of Bolzano. The town center of Caldaro is characterized by the traditional Oltradige architecture style, which had its heyday between 1550 and 1600. Many master builders coming from Italy have influenced the local architecture with exquisite tuscan influences, using typical elements like crenellated walls, window and door frames made of stone and marble, decorated doors and bay windows, mullions with slim central columns, sandstone arches, loggias, verandas, outside stairways and internal courtyards.
The lake Caldaro characterizes its fascinating landscape. The wine landscape, the lake and the numerous castles and fortresses in the surrounding area are all perfect ingredients for an inspiring and colourful holiday. The Oltradige regionis also known as the land of castles and fortresses: Leuchtenburg, the ruin of Altenburg, the castles of Laimburg, Eppan, Boimont are all in the immediate surroundings. Caldaro and the close-by villages of Eppan/Sankt Michael, Sankt Pauls, Girlan, Tramin, Margreid offer to families, foodies and wine conoisseurs a vast array of recreational opportunities.